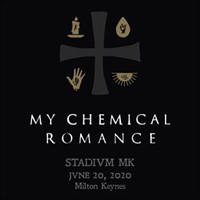 My Chemical Romance have announced they will embark on a worldwide tour this year - including one date in the UK.

My Chemical Romance have announced they will embark on a worldwide tour this year - including one date in the UK.

The band have been teasing the announcement for a couple of weeks now, first posting a cryptic photo on Twitter at the beginning of the year, before following that up with an even more mysterious video which some fans guessed contained letters from the Theban alphabet.

Now the US-based band have confirmed they will launch their long-awaited comeback tour later this year with an appearance in the UK by way of a suitably dramatic, two-and-a-half minute video on their website called "An Offering".

To display your nearest pick-up points, enter your postcode or city/town and click 'Search'.