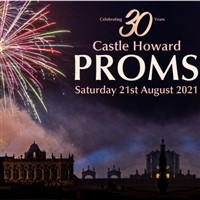 Join us for the sensational Prom night at Castle Howard, one not to be missed.

Join us for the sensational Prom night at Castle Howard, one not to be missed.

Please join us in the magnificent gardens of Castle Howard, this spectacular classical concert will be a night to remember for the whole family. Guest soloists will be joined on stage by the London Gala Orchestra conducted by Stephen Bell.

The programme will include popular classics, songs from musicals and all your flag waving favourites from the Proms including Jerusalem, Rule Britannia and Pomp & Circumstance No.1. With a Spitfire flyover, stunning lasers and spectacular firework finale, this will be a magical evening of musical entertainment.

Best-selling tenor Wynne Evans will be joining North Yorkshire's own operatic soprano, Sarah Fox for the 2019 Proms! Wynne Evans is a best-selling classical artist, with his debut album with Warner Music going straight to number one in the classical charts. His acclaimed performance in the 25th anniversary performance of The Phantom of the Opera, and appearance in a host of concerts at the Royal Opera House, English National Opera and Opera North have made him incredibly popular live performer, whilst he is also known for his decade in the recurring role as Gio Compario in a series of TV adverts.

Giggleswick born-and-bred Sarah Fox will be hitting the high notes in the concert. 2019 will be her first time at Castle Howard, but she is no stranger to the Proms, having performed in the BBC MCM Prom in 2009 and The Proms in 2011. Sarah has taken her vocal talents around the world, with leading operatic roles in German, Barcelona and Cincinnati.